trifolium repens, clover, white clover is one of the most common lawn weeds, and luckily (like a 4 leafed clover) one of the easiest common weeds to manage.
Clover is also commonly used as a feed source for stock.

Clover was introduced into Australia in the late 1800’s by accident. It was later deliberately sown as pasture feed. It can be found from South East Queensland, down the East Coast to the Grampians. Other species of clover include subterranean clover, red clover as well as many other.

Why is clover a problem?

Clover is a legume, just like beans. This means, that via a symbiotic relationship between the plant and certain bacteria, clover takes nitrogen in from the atmosphere and stores it in the root system. When the clover dies the nitrogen is transferred to the soil. It works like a natural fertiliser.

However, the presence of clover can be an indicator to poor health issues in your lawn. Clover prefer to grow in low nitrogen soils, and can be a precursor to other weeds which can survive in poor soil conditions where a well maintained turf grass cannot.

Clover is a shortlived, herbaceous perennial plant. The leaves are trifoliolate, meaning they have 3 leaflets and are smooth and oval. The leaves form what is known as a ‘shamrock’ in shape.

Clover is a low growing plant with creeping stems that can form mats of clover in the lawn. The flower heads are whitish often with a pink tinge and can be up to 2cm wide. 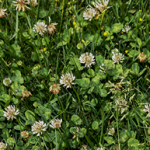 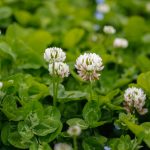 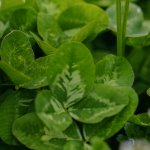 How to Kill Clover Weed

There are many broadleaf and specific herbicides available for the control of clover. Post emergent herbicides include Dicamba and Glysophate, though the latter is not broadleaf weed specific.

To treat 200m2 of turf, mix 130mL of Cutlass M Herbicide into 5-8L of water apply to actively growing weeds and moist soil.

Another way to control clover in lawns is to fertilise it with nitrogen as clover does not grow well in nitrogen rich soils. This has the benefit of improving overall turf health as well.