There are a variety of Wasp species in Australia, they can sometimes be confused for Bees due to their similar appearance. Wasps are brightly coloured Black & Yellow/Orange flying insects with a slender waste and a nasty stinger that protrudes from their abdomen. Paper Wasps, Mud Wasps and European Wasp are commonly found in Australia the way they build their nests varies and may help identify which Wasp you are treating. 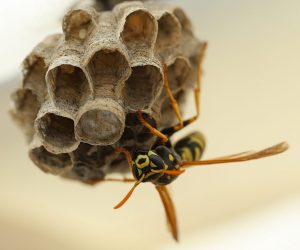 Paper Wasps build their nests from plant and wood fibres which they chew into a paper-mache like consistency creating a ‘paper’ nest.

The Paper Wasp commonly nests in sheltered areas such as under eaves, mailboxes, kids play equipment and attached to walls.

Mud Wasps nest in protected areas commonly building nests on eaves and inside buildings.  Like the name suggest Mud Wasps nest are built from a mixture of mud and saliva. 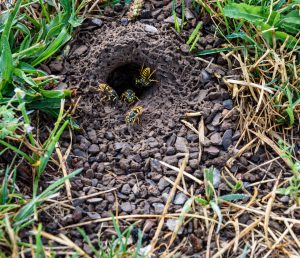 European Wasp nests are generally located underground with the entrance appearing as a hole in the ground. Sometimes the nest may be located above ground in a wall cavity or roof. The European Wasp is well established in the eastern states of Australia. If you have found a European Wasp Nest it may be a good idea to check whether it should be reported to your relevant government authority as it may be a reportable pest (such as in Western Australia).

Why are Wasps a problem?

Wasps are generally more aggressive than Bees and will readily attack if their nests are disturbed or they feel threatened. Wasps inhabit areas near humans due to food and water availability, being particularly attracted to sweet smells, however this unfortunately means that we are at greater risks of disrupting and being attacked by Wasps. Unlike Bees, Wasps do not lose their stinger after stinging therefor being able to sting its victim multiple times in one attack. Wasp stings usually cause burning, inflammation and redness at the site of the sting. Although wasp stings are painful they generally do not lead to more serious health consequences. However, in some cases a person may suffer an allergic reaction, the most serious being anaphylaxis. It is important to reduce our exposure to Wasps as around 1 in 10 people that are stung two or more times by a wasp will become allergic resulting in more severe reactions to any subsequent stings.

Aside from stinging us, our family and friends Wasps may also sting our pets- particularly curious dogs that may disrupt their nests. Wasp bites to your pet may result in a trip to the Vet.

If you’re are noticing Wasps around your home frequently it is likely there may be a Wasp nest on your property. The most efficient way to control Wasps is to locate and treat their nest. Inspect for the nest around your property focusing on sheltered areas:

Underground nests can be identified by looking for an unexpected hole in the ground, due to the high population of Wasps nest you should expect to see a lot of traffic around the nest.

If you locate a nest be sure not to disturb it prior to treatment.

How to Get Rid of Wasp

For direct kill of Wasps apply WaspJet Pro by holding can upright and spraying insects from a distance of 3-6 metres.

How to Get Rid of Wasp Nest

Once you have located Wasp nest apply WaspJet Pro by holding can upright and targeting spray toward nest with wind coming from behind you. Be sure to stand at the safe distance and not directly underneath the nest, WaspJet Pro Spray should reach 3- 6m. Spray with sweeping motion until the nest is saturated.